I spent most of today travelling to Canada's North West Territories and the capital city of Yellowknife. I had a connection thru Edmonton which would have been ok if we did not leave Toronto over an hour late. Travel time from Toronto to Edmonton was just over 4 hours. 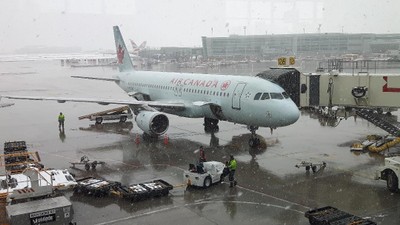 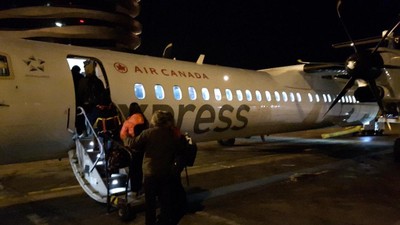 Although I made the quick connection in Edmonton for the 2 hour flight to Yellowknife, I had my doubts that my luggage would be meeting me at the other end. 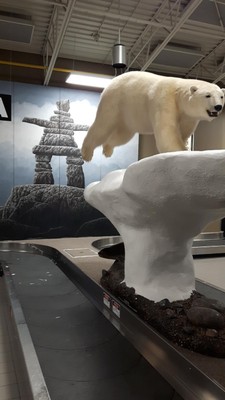 I remained optimistic until the carousel belt stopped at the Yellowknife airport....and there were no more bags! Oh well. There's always tomorrow. Fingers crossed it shows up! But there is a Wal-Mart here, so I am not too worried. I have also rented outdoor clothing - not sure if my Ontario winter clothing will do the trick up here. It was -22 degrees when I landed. My clothing was waiting for me at the hotel once I checked in.

I jumped in a cab at the airport to my hotel - Chateau Nova - I had missed the hotel's shuttle because I had to report my lost luggage. The taxi ride was just over $13. Late night arrival.....time for bed! There is just a 2 hour time difference from Toronto time but that's enough after a day of travelling.

I was able to see the Northern Lights from the plane - so mission accomplished! Hopefully they will be better tomorrow night.

Traveller's Tip #1: Be a tourist in our own country! Canada is huge!!!

Posted by moorsey88 23:25 Archived in Canada

Previous Next Table of contents

Sounds like a great start for another adventure. Have some fun.

The Northern Lights!! You are the travel goddess! Have a blast Moorsie

Comments on this blog entry are now closed to non-Travellerspoint members. You can still leave a comment if you are a member of Travellerspoint.

If you aren't a member of Travellerspoint yet, you can join for free.